After seven months, we made it to continent number seven on our around the world family adventure – Antarctica! From Montevideo, Uruguay, we made a brief stop in Buenos Aires before boarding our plane for our flight to Ushuaia, on the southern tip of Argentina. In Ushuaia we reunited with the grandparents and boarded Silversea’s Silvercloud for our Antarctic Expedition cruise.

Our impressions of Antarctica 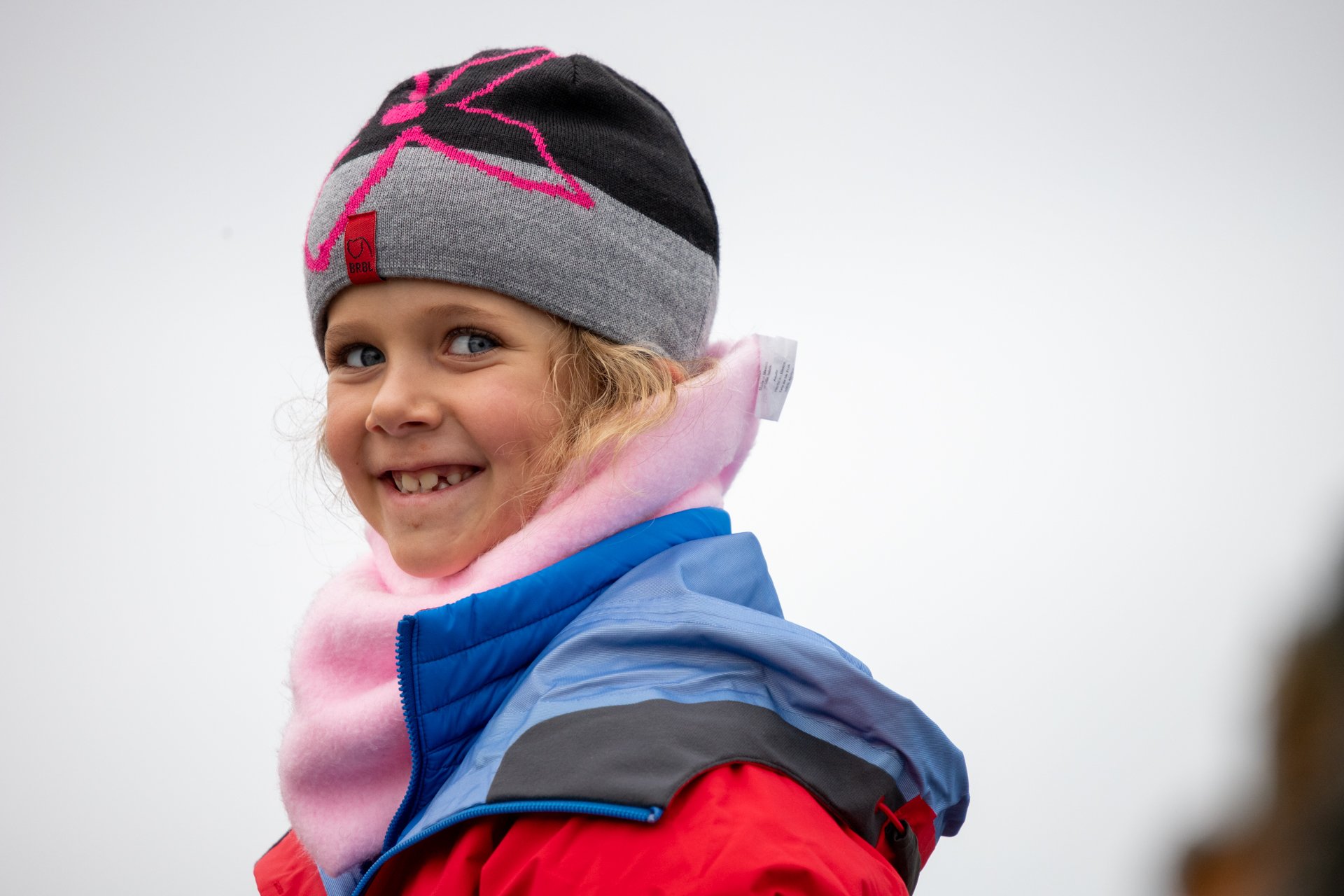 If you go to Antarctica, take the Silvercloud and try to go when it isn’t very rough so you can make it to Elephant Island!

Antarctica is one of the best places I’ve visited in my entire life! Penguins & Seals everywhere, beautiful landscapes, and just an amazing experiences. 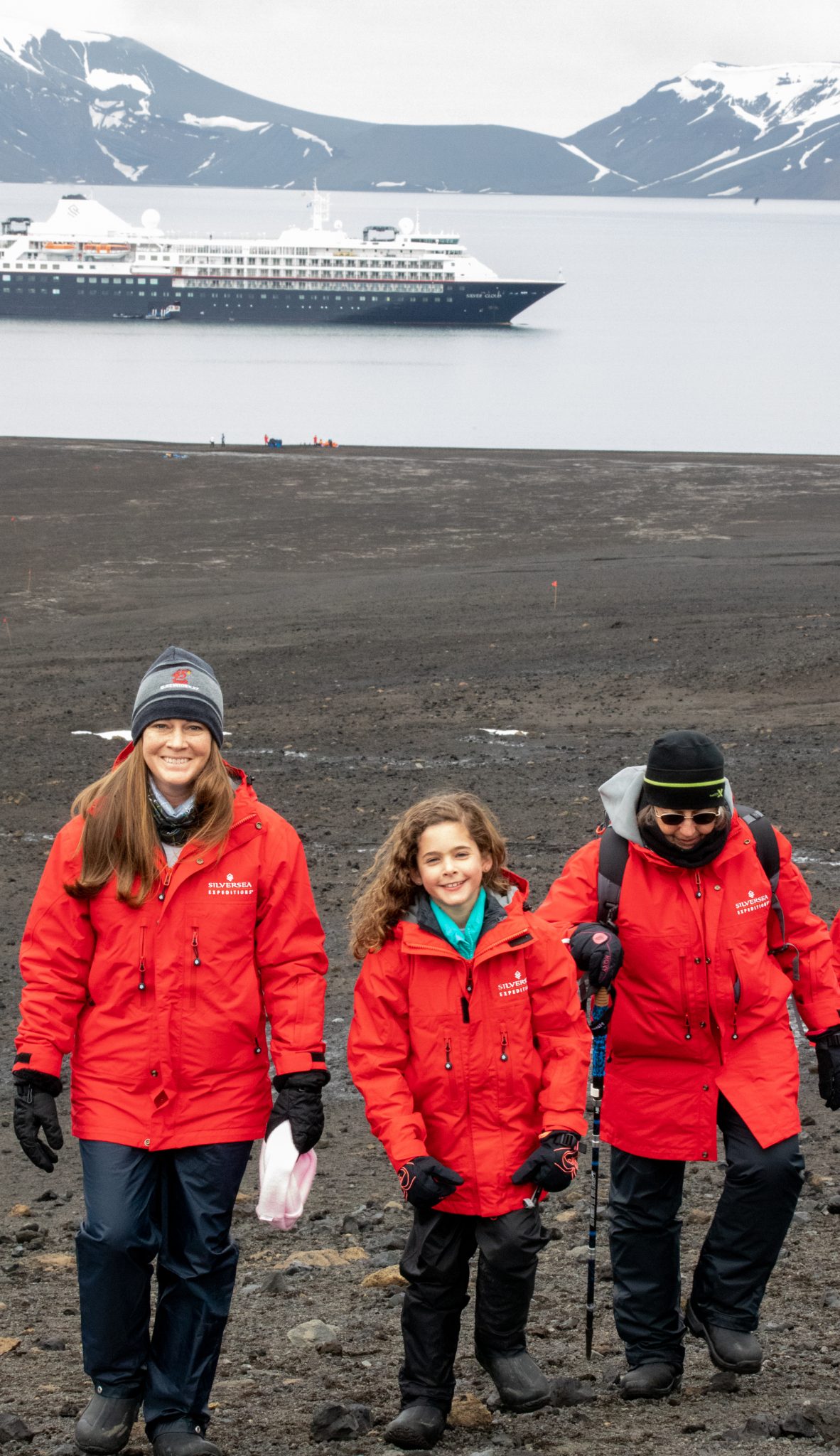 It’s hard to describe the ever changing landscape. It was impressive to see how the expedition team was able to successfully get passengers from the age of 6 to 86 ashore.

Antarctica is impressive – such variety in the sights to see. Our first trip was prefect and great to be with the grandparents. On our next trip, we’d like to get even further South, deeper into the peninsula.

We started and ended our expedition to Antarctica with a few nights in Ushuaia, the southernmost city in the world. The girls were so excited to explore the area with Ma before and after the cruise. While in Ushuaia, we strolled through the streets of the growing city, visited the Parque Nacional Tierra del Fuego, dined on some amazing seafood, and enjoyed a night at the Virtuoso property, the Arakur Resort & Spa.

After three days of anticipation in Ushuaia, we boarded the Silvercloud. As we’ve experienced with many of the expedition cruises we’ve taken before, the captain and expedition leaders often make changes to the original itinerary in an effort to ensure everyone on board has the best experience possible. This cruise was no different and moments after leaving the dock, the expedition leader was on the microphone sharing that they had made the decision to reverse our itinerary, and begin our adventure on the Antarctic Peninsula rather than the planned Faulkand Islands. The change enabled us to have a much smoother and more enjoyable crossing of the Drake Passage, and another chance to try to make our landings in the Faulklands. All worked out perfectly, and we enjoyed a very smooth two days at sea en route to the Antarctic Peninsula.

For eight nights we filled our schedule with morning and afternoon activities. We had clear days and cloudy days, days with wind and swells, and days that were so calm, the water was like a lake. We took zodiac cruises to watch for wildlife – wales, birds, a leopard seal. On land, we hiked on glaciers in search of penguin colonies, visited research stations, explored an old abandoned whaler’s station, and walked along the caldera of a volcano that erupted less than 100 years ago where the geothermal activity keeps the ground warm enough so that there isn’t any snow. In the whole time we were there, we only missed two of our planned landings due to weather that prevented us from getting off the ship. The onboard team did a great job of getting all of the passengers on and off the ship in a manner that was safe and efficient. 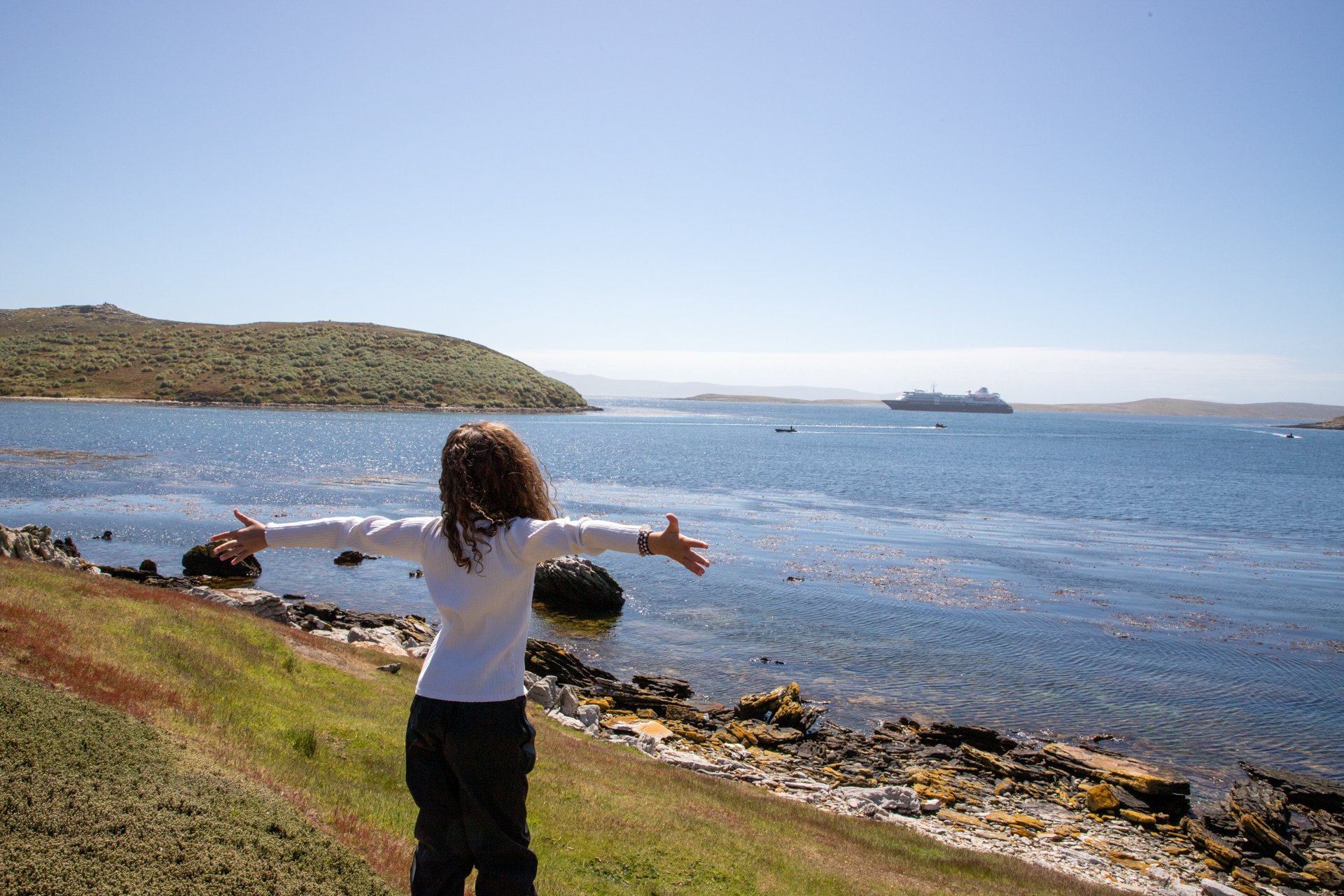 After our week exploring the Antarctic Peninsula, we headed North to the Falkland Islands. The plan of the captain and expedition leader worked out, and rather than being greeted with storms and 60+knot winds that would have welcomed us had we visited at the front end of our voyage, we arrived at our first stop in the Falkland’s on a clear sunny afternoon.

It was on the Falkland Islands that we found our first colony of Rock Hopper Penguins, Brown Browed Albatross, and King Penguins. After the week in the snow and ice, it was nice to remove the jackets and take a long walk in the sunshine. Having a landscape that reminded us of Scotland, it was fun to walk over the rolling green hills, observing the abundant wildlife. Seeing penguins running among the sheep was a site we didn’t expect.

On our second afternoon in the Falkland Islands, the winds returned, and unfortunately, we weren’t able to get off the ship. Still though we were excited to have made the landings we did, knowing that had we stayed with the original itinerary, we would have only been able to sail past in a storm.

We were all very pleased with our experience on the Silvercloud. The naturalists on board were very knowledgable and engaging, and the accommodations spacious and comfortable. Being at sea for 16 nights, we really enjoyed dining in the various available venues. We started our trip with a couple of nights eating outdoors at Silversea’s signature Hot Rocks, then throughout the cruise, divided up our evenings between the Italian restaurant, the main dining room and the fine dining room. We also really loved the ability to order room service on the mornings with an early scheduled departure when every minute of sleep can make a big difference in moods over the course of the long day. Throughout our journey, we were surprised with little touches – Santa visiting in a Zodiac on Christmas Eve, staff appearing with a guitar at 7am on Christmas morning to serve breakfast in our suite while singing Christmas carols, ringing in the New Year with an outdoor deck party in the middle of the sea, and the ability of the captain and his team to completely reorganize our itinerary and manage to keep us away and out of site from the other 19 ships that were exploring the peninsula at the same time we were.

An interview with the Naturalists on the Silver Cloud

On our final day at sea, on our way back to Ushuaia, Angela and Emily sat down to interview a few of the Silversea Naturalists. Many of the questions were sent in by their schoolmates at home.

A gallery with some of our photos from Antarctica

There are many ways to experience Antarctica - explore a few of the adventures you can enjoy with some of our Premier Preferred Partners!

When selecting a cruise to take to Antarctica, there are many things to consider. Smaller ships carry few passengers, which leads to more time on land at each landing. A larger ship will have more onboard amenities, and in general a smoother ride across the Drake Passage, however once on the peninsula, the larger size and number of passengers can limit the time spent on land. Speak with one of our advisors to help determine which may be the best option for you.