Dubrovnik was a scenic drive down the coast from Split, a little over three hours in total. We didn’t realize before our visit to Croatia that Dubrovnik is separated from the rest of the rest of the country, and in order to reach the city by land, one must pass through a portion of Bosnia. We rented a small 2-bedroom apartment just outside the old city walls of Dubrovnik and used the place as a home base for our last week in Croatia.

For a week we explored the city of Dubrovnik and surrounding area. It is easy to see why the city has become such a popular cruise port and tour stop. Rich in history and so well preserved, you really do feel like you are back in time wandering the narrow alleyways and stone streets.

On our first full day in the region, we took a day trip further down the coast into Montenegro where we visited the cites of Perast and Kotor. First we stopped in Perast where we visited the “Our Lady of the Rock” church and saw the many relics survivors from all sorts of incidents have shared for display.  From Perast, we continued south to Kotor where we enjoyed a guided tour of the walled city. We were lucky to be in Kotor on an afternoon without any cruise ships, the crowds were light, and we didn’t complain.

Montenegro gained it’s independence in 2006 and in the last 13 years, the economy has boomed with tourism. Our guide shared that prior to the country becoming independent, there were no restaurants, and very little tourism, the country was very poor. Once independent and with borders open to visitors, things have very much turned around. Almost all of the bars and restaurants we saw while walking through the UNESCO walled city are new since 2006.

After our day in Montenegro, we were able to return our rental car and relieve ourselves of the task of finding a place to park for the remainder of our stay. Dubrovnik has become so popular, parking a huge challenge within the city.

We spent our first full morning in Dubrovnik on a  guided walking tour becoming oriented with our new surroundings. On the tour, we learned how the city was built, about the early inhabitants, the churches and the many relics they contained,  and about the earthquakes that almost destroyed the city more than once.

After we knew our way around, we spent the following few days enjoying the city. Our apartment was located just outside of the city walls and north gate. Because we were so close, we were able to make many trips into the walls to try out several restaurants and cafes and just enjoy our time exploring. Our favorite times were late in the afternoons after the daily large cruise ships would go back to sea leaving the streets a little less crowded.

One day we took a boat ride out to the island the locals use as their beach, and cooled off with a swim in the Med. While the water was refreshing, we definitely all prefer our sand beaches over the rocks. Another day we took a ride up the cable car for lunch with a panoramic view.

Dubrovnik was a nice finish point for our time in Croatia, it really would have worked well for a start or finish. It is a beautiful city and easy to see why so many cruise ships and day tours plan stops there. Because it is so popular, prices are a bit higher than they are in other areas of the country and there are several “touristy” restaurants. It really helped to have our guides’ personal recommendations on where we could go to avoid the crowds and dine in the same restaurants as the locals. 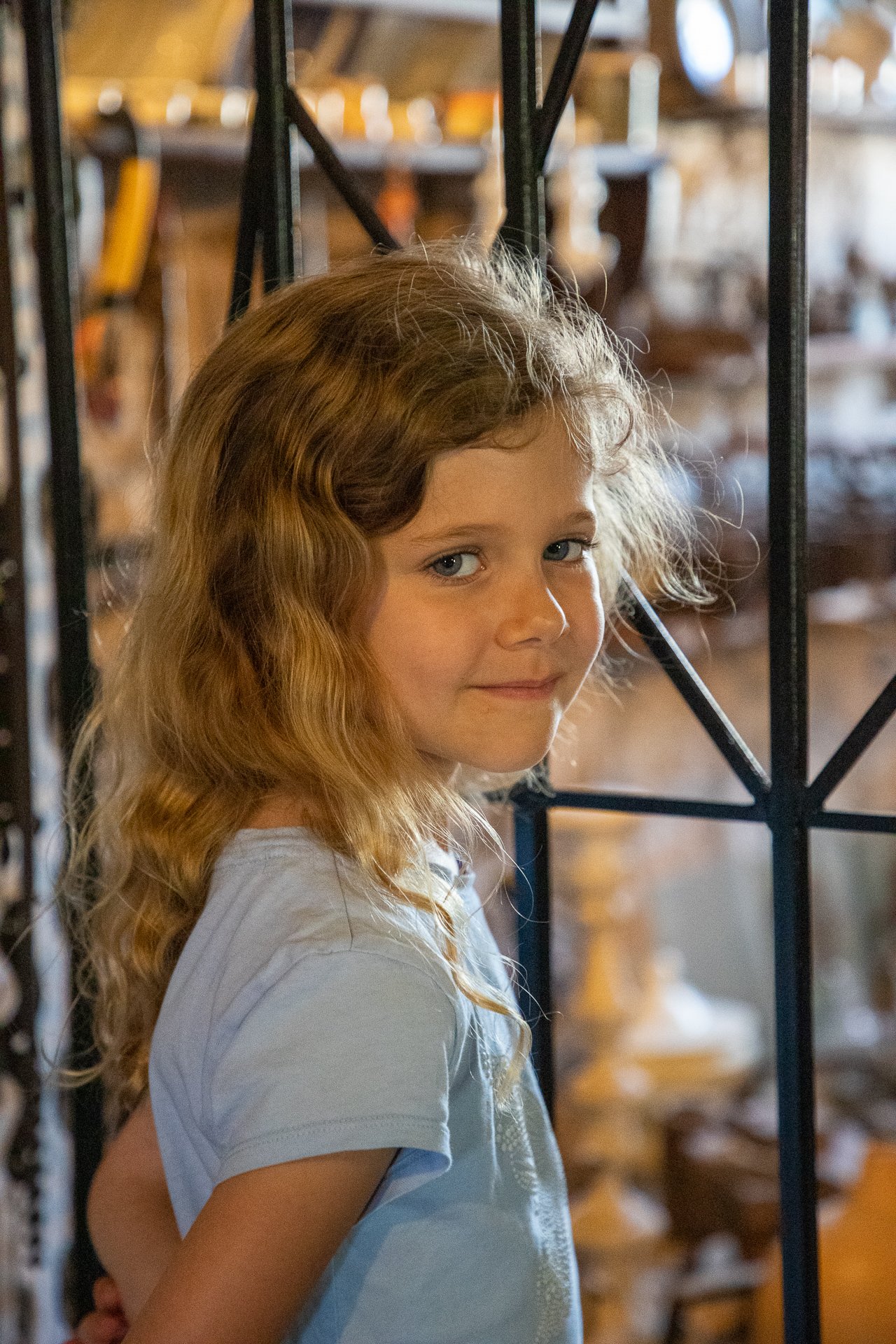 On Saturday, we visited Perast. We started the cool day with the museum. It was two floors, but it had a mouthful of infermachon from the past. Here is the story- A long time ago, when it was just finished being built. the man who paid for it said to the builder – This is good but can you make something more beautiful.? The builder said that he never had made anything so beautiful, but I could if I tried to. The man who owned the palace then pushed the builder off the roof so he couldn’t ever build a more beautiful building. It was a cool museum. Then we went on a private boat ride out to an island where we walked through a church and made many wishes for good luck. We then went to another town for another tour. Our guide started the tour with ice cream. Then we looked for cats, then we had a special cake. it was sort of cool.

Our first day in Dubrovnik, we took a tour with Rose. Rose was nice, but I liked some of our other tours better. I did like seeing Jesus’ diaper and the piece of the cross. On Tuesday, we took a boat over to a killer beach. We found thousands of fish and hermit crabs. I found some on rocks that were not safe and moved them. We also found a bunch of peacocks and rabbits all over the place. in the water, it was freezing cold, but once you got your shoulders in, it felt amazing. It was a killer beach day.

If you ever go to Dubrovnik, you have to eat at the little Indian restaurant. It only has 4 tables but it is awesome. The cauliflower dipped in chili sauce served with vegetables is amazing. The gelato is great at Dolce Vida. Oh, and one other thing –  If the water is rough, don’t take a glass bottom boat ride. I did and I almost puked. 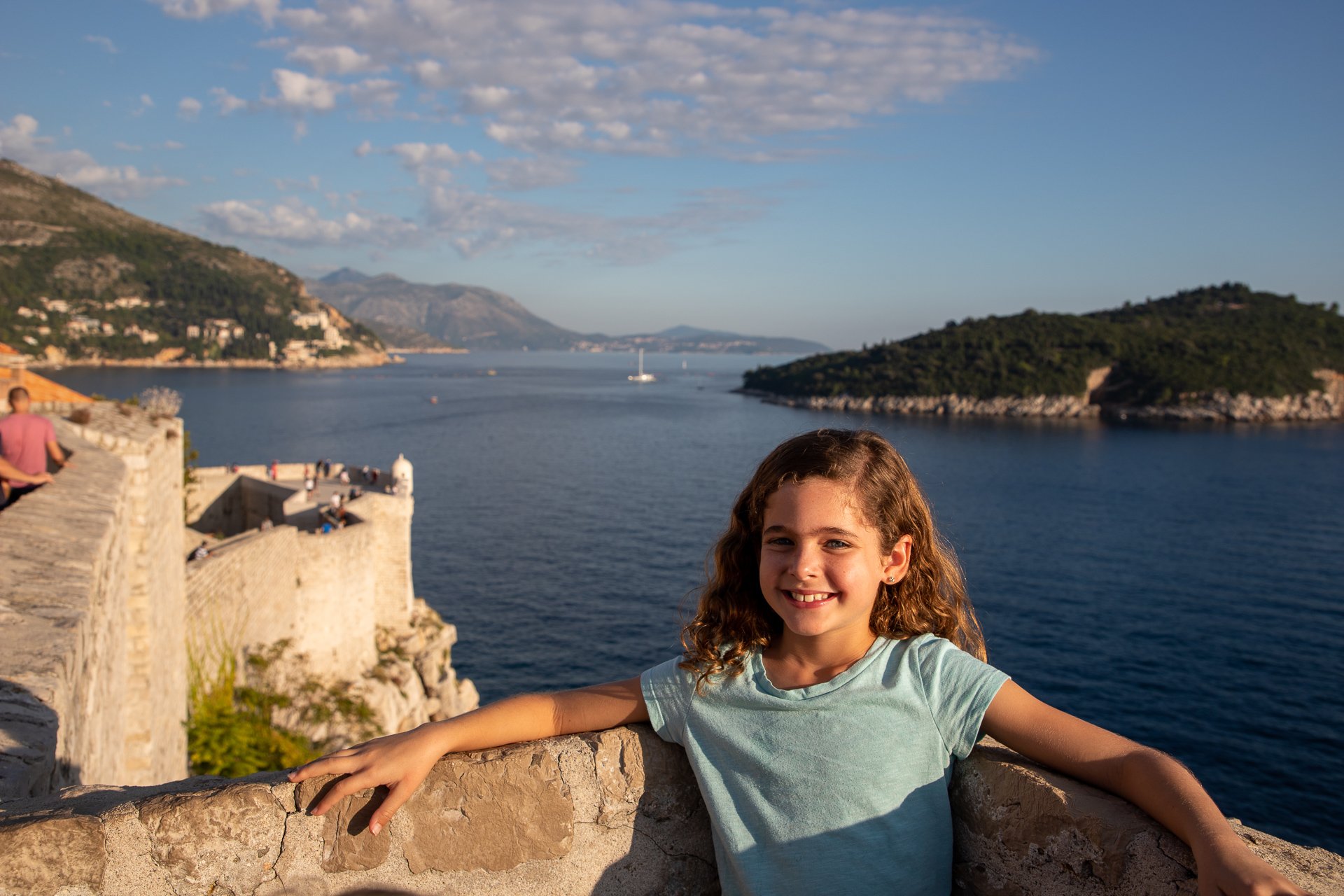 On our first day in Dubrovnik, we left Dubrovnik and went to another country called Montenegro! It was about a 2-hour drive there. Our guide situation was terrible though! First, our original guide fell off her scooter, so she couldn’t meet us. The next guide got stuck in traffic, so he couldn’t get to us in time for the first part of our tour. He did call one of his friends though who was a museum  tour guide and she did a great job. Woowhee. Our first place in Montenegro was called Perast. The museum guide took us around the town, beginning with a tour of her museum. We learned about what the sailors would take out to sea, what they wore, etc., etc. We then took a boat out to a little island called Our Lady of the Rock. Last we had lunch at a place where mommy had an allergic reaction to her tuna. Finally, after lunch, we met up with Nick, our guide for the afternoon.

Nick led us on a small tour of the walled city of Kotor. He took us to a cat museum that had pic’s of cats from all over the world! Next, he bought us cake and showed us a street called “Let Me Pass” haha.

The next day we went on a tour of Dubrovnik. Our guide knew a lot but wasn’t very kid friendly, so I’m only going to mention one part. We got to see a relic that had a PIECE OF JESUS’ CROSS, and one of his first DIAPERS! The Diaper wasn’t all real because people who wanted to have a baby would take part of it and nuns would crochet it back together again. We ended our first day in the city with a gelato and walk along the city walls just before sunset.

One day in Dubrovnik we went to a super rocky beach. It was fun for the most part. We got ice cream, while we walked over to the part of the island we were going to swim at and on the way saw hundreds of bunnies and thousands of peacocks. When we got to the beach, we swam as a family which rarely happens. Then, the not so great happened. I moved to a spot for peace and quiet to read (and some alone time) but my family followed me over. I asked them nicely to leave and they did, two of them anyway. DADDY didn’t’ though, he stayed until I left, then he left too. Sometimes I really don’t get him. All in all though, it was a pretty great day!

There are many ways to experience Croatia- explore a few of the adventures you can enjoy with some of our Premier Preferred Partners! Contact any of our team members for additional information on any of our partners and to discuss which may be the best option for you.

Croatia, once considered an “undiscovered Italy” is no longer undiscovered. Many cruise ships stop in the ports of call of the Croatian Coast. A cruise can be a great way to get a glimpse of the cities. To truly experience Croatia and see why it has become so popular, an extension pre- or post-cruise will providing the opportunity to stay over night and see the cities after the cruise crowds head back to sea.

Taking a tour with a small group provides the opportunity to experience the sites of Croatia with other like-minded travelers on popular pre-designed itineraries. Let the tour companies organize the logistics, so you can “sit back, and enjoy the ride” Visit the top attractions during the best times and let someone else take care of planning all of the details.