A quick one hour flight carried us from Edinburgh down to Dublin, and we were impressed with the genuine kindness of the Irish people from the moment we landed. The Hertz shuttle driver seemed genuinely interested in our stay, offering tips on how best to get out of Dublin rush hour and offered recommendations on sights to see while in the area. When we arrived in the lot to pick up the car, one of the  attendants saw us with our bags, asked for our keys,  and retrieved the car for us so we didn’t have to drag everything while searching for the car. It was a pleasant start to a fun week ahead.

With only a week in Ireland, we had to make some very difficult decisions on how to divide up our time. Rather than spend the week in the car, driving the winding country roads from one end of the country to the other, we chose to visit just two areas in Southern Ireland, Kilkenny and Kenmare. We are sure we’ll return again one day to see more of the country.

We filled one of our days with a visit to the Medieval city of Kilkenny. While in the city, we toured the Kilkenny Castle, walked the picturesque cobblestone streets, and paid a visit to a local pub for lunch and a few pints.

Another day we drove to Kells Priory, ruins of a fortified abbey dating back to the 1100’s, now an Irish National Monument. Kells Priory had the same appeal to us that Doune Castle did in Scotland. While open to the public and free of charge, the site was empty, and we didn’t complain. Immediately after wandering through the entrance gates the girls were off and running, climbing on the old stone walls.  Not a minute or two later someone was walking very quickly in our direction. Rather than reprimand us for breaking the rules as we were expecting, the staff member had come to introduce herself and invite us to join her on a small group tour up into one of the old towers. She pointed out a few places for us to explore, told us where to be for the tour and wished us well. Once given the green light, the girls wore themselves out climbing in and out of every structure they could find.

After a few nights enjoying the small town life in the Irish countryside, we loaded into our car and drove a little over three hours to our second Ireland stop, the Virtuoso property, Sheen Falls Lodge. We thoroughly enjoyed our short stay at the lodge and as it is in so many areas we visit, we were sad we didn’t have a little more time. From Sheen Falls, we made our way back to Dublin, sad to leave Ireland, but excited to return to Switzerland and the mountains.

Located in Ireland’s heavenly Southwest, Sheen Falls Lodge is a luxurious 5* resort offering an elegance and style of unique character. Nestled between its own cascading waterfalls and Kenmare Bay, this original 18th century fishing lodge boasts 72 well-appointed rooms and suites carefully designed and newly refurbished. The main restaurant The Falls overlooks the floodlit waterfalls while casual dining is offered in either  Sheen Lounge or Sheen Bar.

On our first full day there, we awoke to rainy weather, and the hotel concierge arranged for a perfect rainy day activity for the four of us – a Chocolate making workshop at a local chocolatier. We learned about the ingredients in chocolate, what makes one chocolate better quality than another, and how changing the temperature affects the consistency of the chocolate. After learning about the makeup of chocolate, we practiced making chocolate disks, lollipops, and bars, chocolate dipped marzipan and salted caramel truffles. At the end of the class, we left with enough chocolate to keep us going for the next few weeks.

On our second day at Sheen Falls, we arranged for the girls to take an Irish Dancing Lesson at the Bernie O’Sullivan School of Irish Dance. Bernie’s studio was built behind her house, just outside of Kenmare. The walls were lined with pictures and the ceiling decorated with medals won by many of her many students a few have even been world champions. While we aren’t on that level yet, Angela and Emily each learned a few more steps and some great practice techniques for us to work on while we continue our travels. 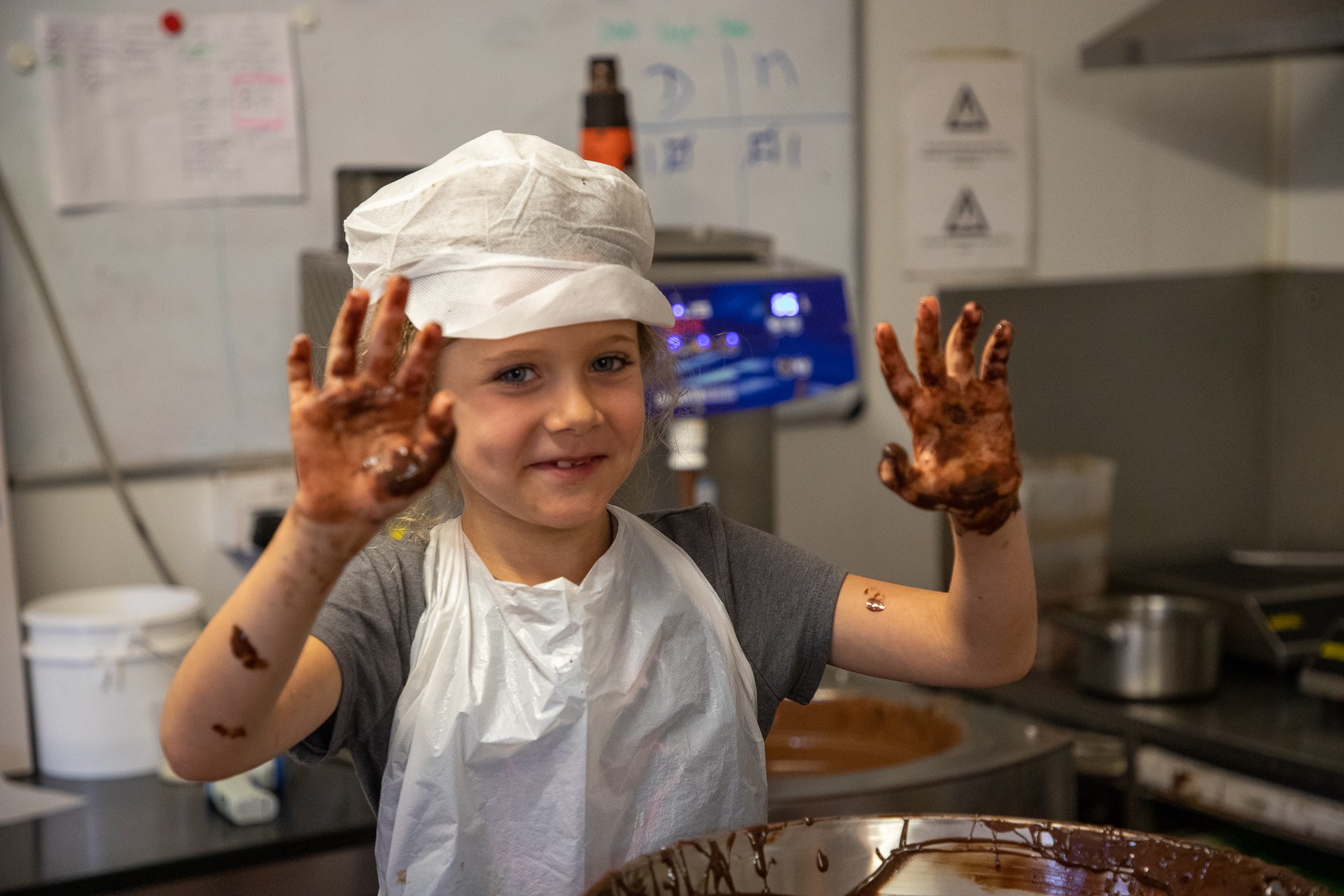 On Wednesday [July 31],. we flew to Ireland. Ireland is so much fun, you guys would love it. We got to… Wait for it… Make Chocolate! When we did it, the chef taught us about chocolate. We made milk and dark, some with caramel, some without. We made chocolate lolly pops and bars, caramel filled and chocolate dipped marzipan. It was so cool.

We also did Irish dancing. We learned some new teak neak [techniques] and three new steps. The teacher has taught world winning champions. It was a great class. Her name was Miss Bernie she was really nice and I hope to see her again. 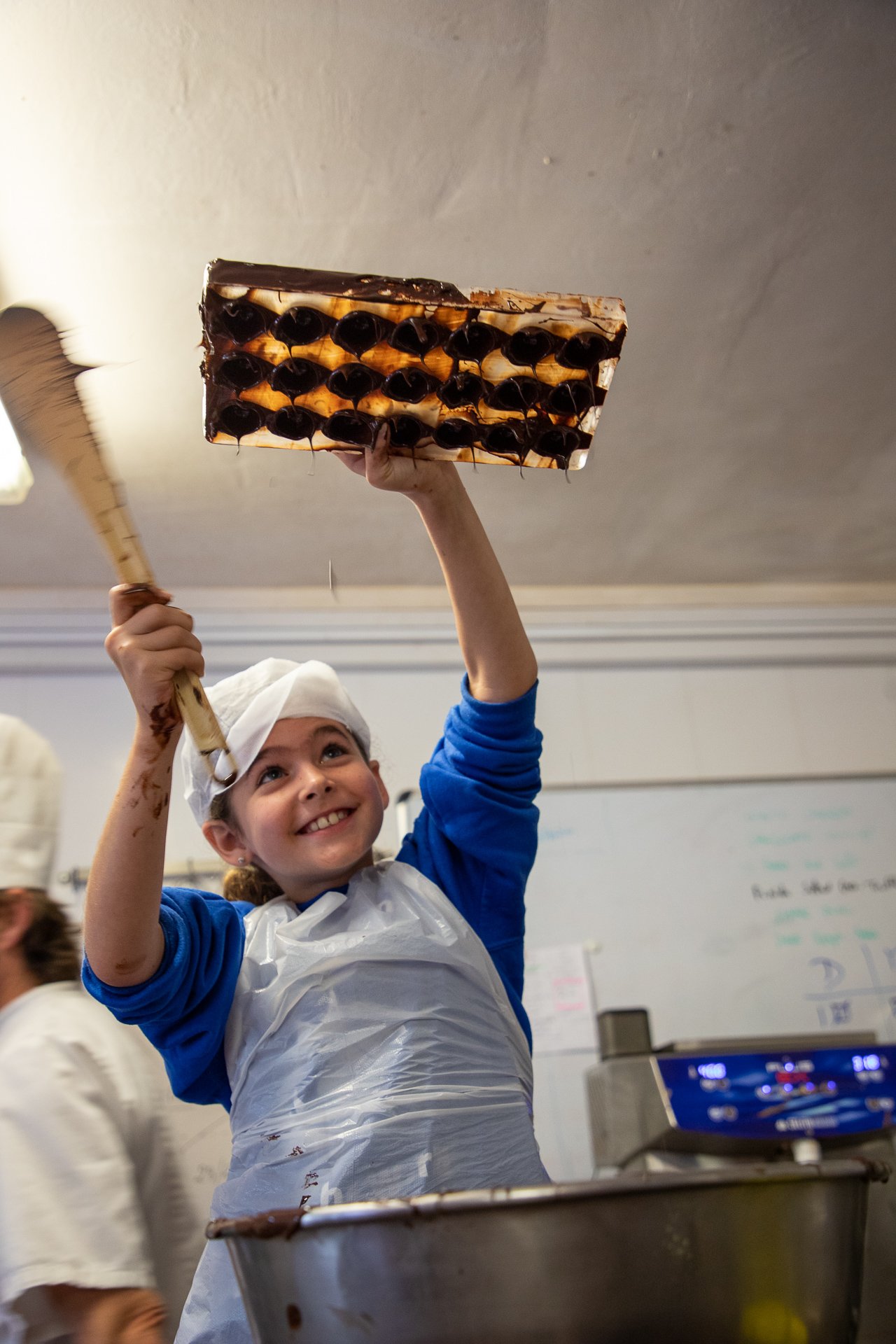 The first thing we did in Ireland was go to explore the town of Kilkenny. In Kilkenny, we went to lunch and explored a castle. I did not like this castle a lot.

The next day though, we went to Kells Priory and explored the ruins where we could climb on any walls we wanted to. At the end we even got a free tour of a tower. I liked this castle much better.

On Sunday [August 4], we went to a chocolatier and got to make chocolate! it was so fun, we talked about crystallization, and how if the chocolate isn’t the perfect temperature it wont come out right. We put it on the counter to cool it off. We made chocolate lollipops, chocolate dipped marzipan, caramel filled chocolate bites and chocolate bars! What a day.

The next day, we got to go have an Irish dance class. It was so fun. We learned a lot of techniques and two new steps. we learned a lot of exercises to help our dancing. Our teacher had instructed several kids who had won at the world championships. It was another great day. I hope that we get to see Ms Bernie again!

There are many ways to experience the United Kingdom - explore a few of the adventures you can enjoy with some of our Premier Preferred Partners! Contact any of our team members for additional information on any of our partners and to discuss which may be the best option for you.

There are several options for cruising around the perimeter of the UK- Large ship, small ship, expedition. The cruises are a great way to see the sections of the country you may like to return to at a later date. As we do with any cruise, a few days pre- or post-cruise can provide a little more time to explore some of the interior of the country.

Taking a tour with a small group provides the opportunity to experience the sites of the UK with other like-minded travelers on popular pre-designed itineraries. Let the tour companies organize the logistics, so you can “sit back, and enjoy the ride” Visit the top attractions during the best times and let someone else worry about driving on the other side of the road, parking, purchasing tickets.