Rovinj, Croatia was everything we imagined Croatia to be. It was a great first stop with a robust food scene, markets filled with fresh produce, breads, jams and olive oils. Amazing home-made pastas and fresh seafood at very reasonable prices, pedestrian only cobblestone city streets.

Rovinj, Croatia was a great first stop for our Croatian tour. We rented a small apartment about a ten minutes from the historic pedestrian only downtown. While there, we dined in  several restaurants, and were really surprised by how great the food was. We found the food to actually be consistently better than what we experienced in Italy for a fraction of the price – pasta & pizza included.

For five nights, we were based in Rovinj. After a couple of days wandering the old city streets on foot, we were very excited to spend a night in the Virtuoso property, Hotel Monte Mulini, where we could enjoy the sun by the pool. From the hotel, we could have walked the 10 minutes along the waterfront into the historic area. Instead though, we enjoyed the resort, swimming in the many pools and getting our feet wet in the Mediterranean Sea.

After our enjoyable stay at the luxurious hotel, we picked up a rental car and drove to a neighboring town to where we boarded a boat that took us across to the islands and National Park Brijuni. The National Park came highly recommended, and looked interesting on paper. We did see a few interesting things on our tour which included – ruins from 100 AD, a small safari park, and quite a bit of history. The tour began with a narrated tram ride around the grounds for about an hour. The leader did a nice job explaining, but was seated in the front of the tram, speaking over a microphone for all to hear. Being based a few tram cars away, there wasn’t any interaction, it was basically listening to an audio guide. The experience felt a bit more like an amusement park or a museum than it did a National Park. While there were some highlights, the visit was a bit of a letdown, and we all decided we’d have rather spent another afternoon at the Hotel Monte Mulini or exploring the winding streets of Rovinj.

On our way out of Rovinj, we stopped to visit a couple more of the Istrian cities, our favorite being Hum, registered as the smallest town in the world. Set up on a hillside, the small town has only 20 residents, yet is complete with cafes, restaurants, and several shops highlighting the local Istrian specialties – truffles & olive oil.

As you enter Hotel Monte Mulini, the panoramic view of the blue sea and sky spanning from almost every part of the hotel will leave you with a feeling of much-needed peace and rejuvenation. Indulge yourself and your body with one of our treatments based on the elements of water, stone, wood, and gold. If you are looking for a unique experience, we recommend the Chef’s table, Gin library, Yoga SUP, or simply a cocktail at the Mulini beach bar with the most beautiful view of the sunset.

Angela and Emily loved jumping in and out of the many pools on property. The hotel is close enough for a quick walk to town, but just far enough feel separation from the crowds. All of the food we tried was very good, in line with everything we sampled in the region. 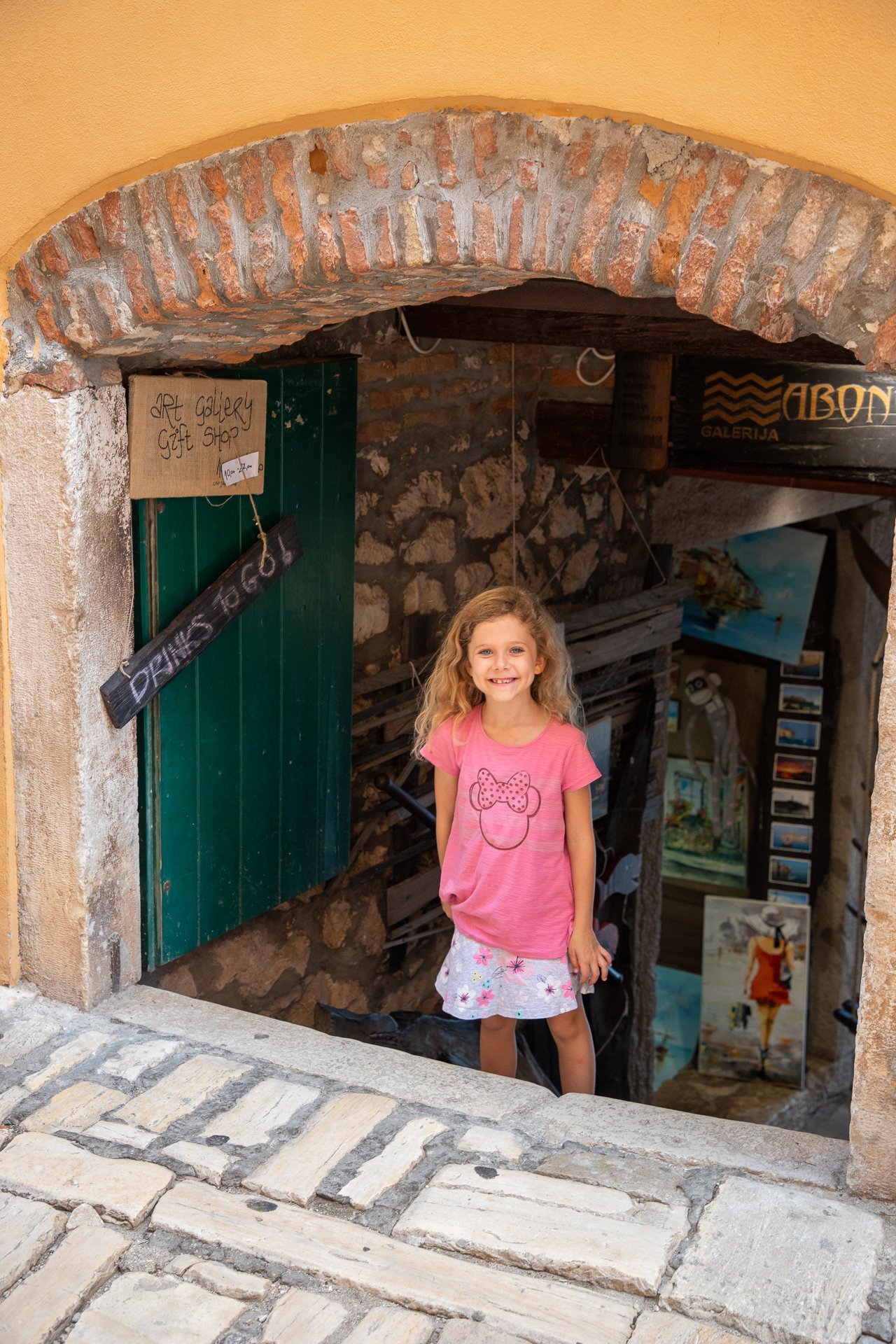 We drove three hours to Croatia. We walked to our apartment, wayted two seconds and somebody took us to our room. We were way up high ont hte tenth floor. It was huge! there were three beds, one big, big, big, living room with a loft. There was even a wasching machine and a drying rack. When we started to explore, we got gloto [gelato] that was so so so so good. Mine was flavored like cheesecake – yummy!. On our first day we went past a Hana tato [Henna tattoo] place while climing a bunch of stairs to see a gorgis view. We tried to find the tatto place again the next day before we checked into the fancy hotel, but couldn’t find it again. 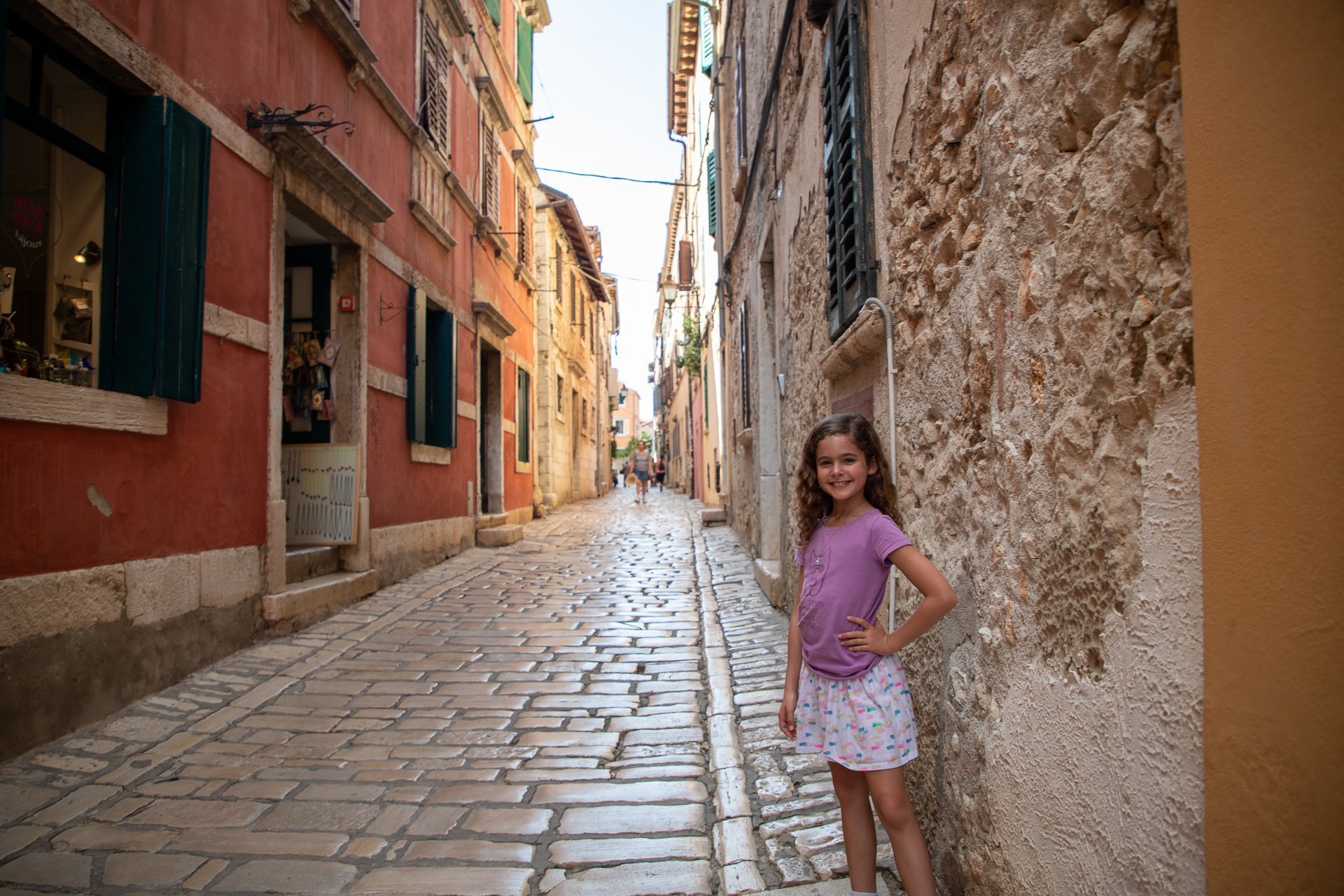 Our first stop in Croatia was called Rovinj. We stayed in an apartment on the top floor. On our first day we did a bucket load of school before we went and got gelato while walking around. We saw quite a few cats, and a place to get Henna Tattoos, but we weren’t allowed to get any that day. The next day we bought a pair of shorts and tried to find the Henna Tattoos again, but we couldn’t find it ,so we went home. The following day, we went to a fancy hotel and swam the entire time we were there. It was a great hotel and Emily and I had our own room. On our last day, we went to a National Park. It took us a long car ride, and a 30 minute boat ride. It really wasn’t that exciting or fun, we would have much rather stayed at the hotel or in the old city.

There are many ways to experience Croatia- explore a few of the adventures you can enjoy with some of our Premier Preferred Partners! Contact any of our team members for additional information on any of our partners and to discuss which may be the best option for you.

Croatia, once considered an “undiscovered Italy” is no longer undiscovered. Many cruise ships stop in the ports of call of the Croatian Coast. A cruise can be a great way to get a glimpse of the cities. To truly experience Croatia and see why it has become so popular, an extension pre- or post-cruise will providing the opportunity to stay over night and see the cities after the cruise crowds head back to sea.

Taking a tour with a small group provides the opportunity to experience the sites of Croatia with other like-minded travelers on popular pre-designed itineraries. Let the tour companies organize the logistics, so you can “sit back, and enjoy the ride” Visit the top attractions during the best times and let someone else take care of planning all of the details.